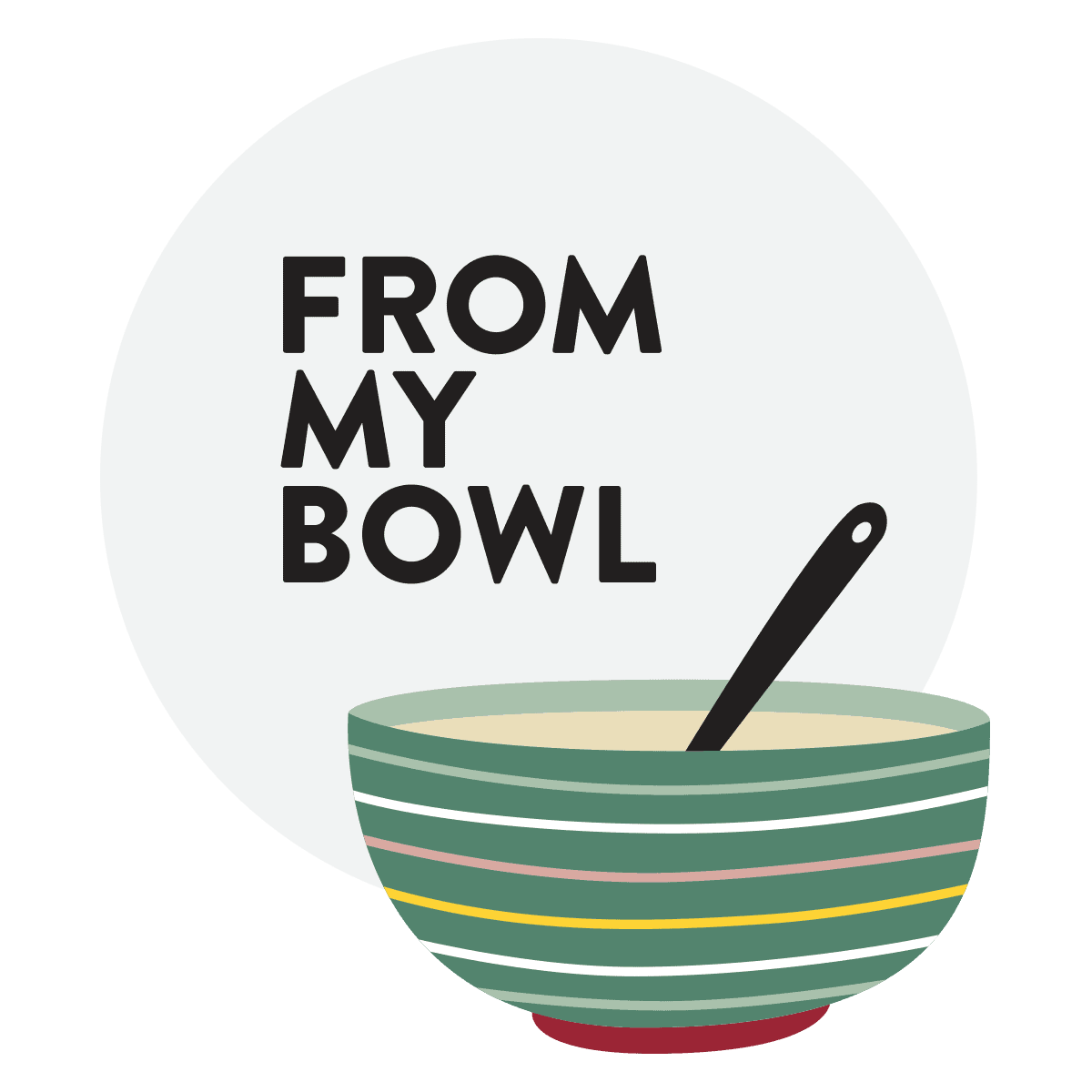 This Fattoush Salad with a Creamy Sumac Dressing is a spin on a classic Arabic Recipe! It’s fresh, tasty, and packed with veggies. Vegan, Healthy, and Oil-Free!

This salad might honestly be my new all-time favorite salad. And I eat a lot of salads, guys… 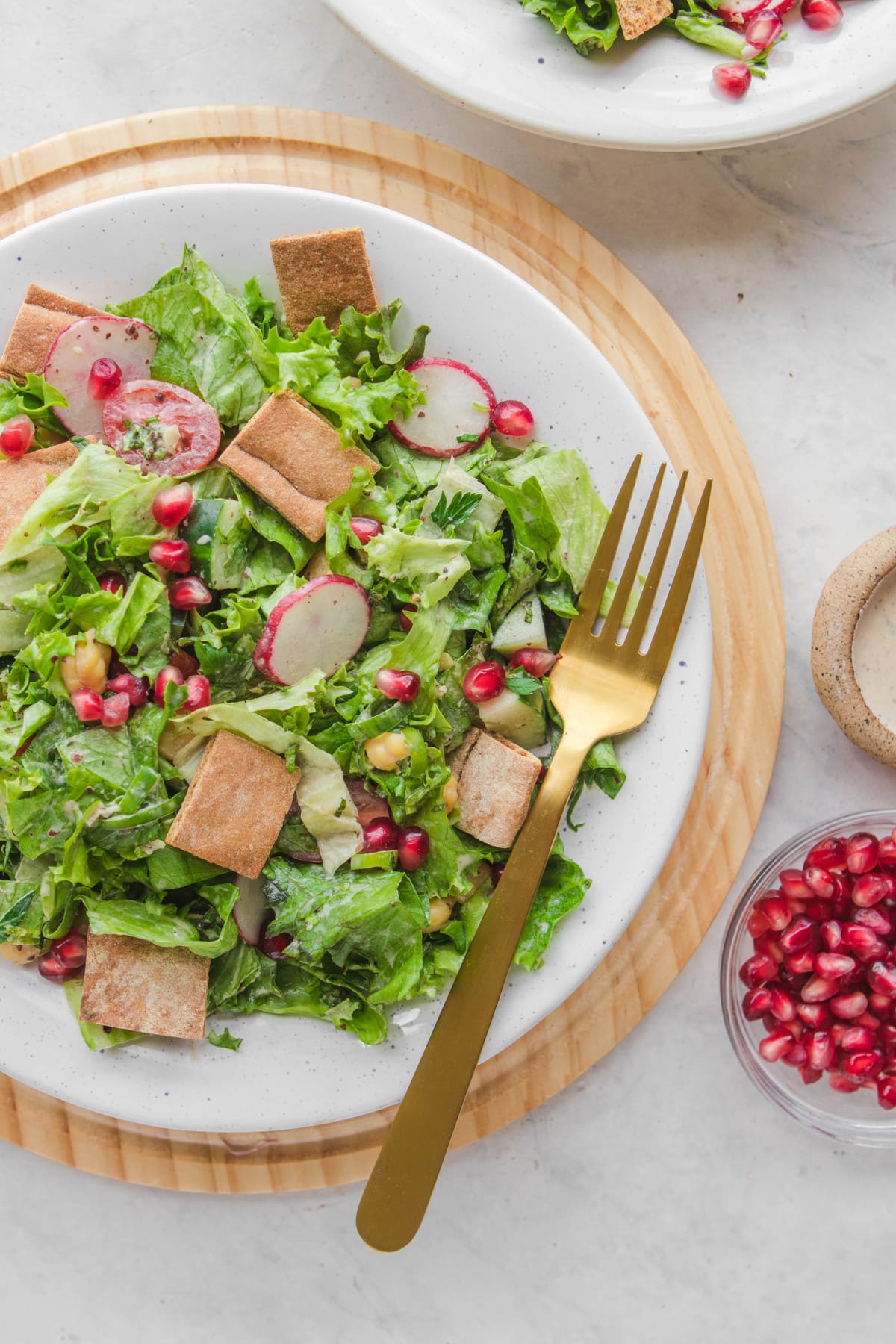 Now traditionally, a Fattoush Salad is made of Leafy Greens, different Veggies (typically Radish, Cucumber, and some form of Onion), Parsley, Mint, fried Pita Chips, and a Sumac Vinaigrette.

However, I always like to put my own spin on things — as you have probably realized by now. 😉 I’ve made a few additions and swaps to the traditional recipe, but I must say I am very pleased with them. And I think you will be too. 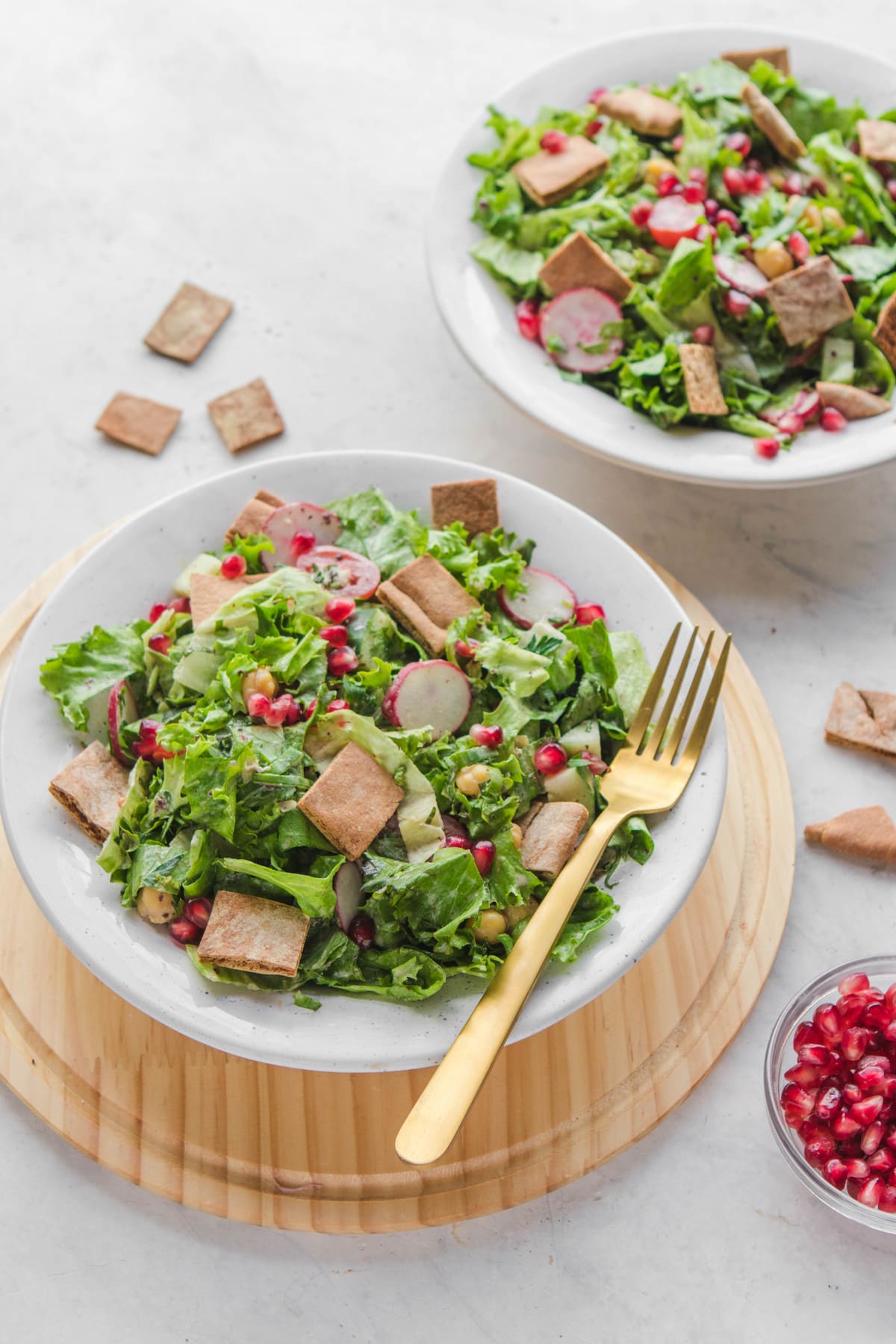 So while this may not be a traditional Fattoush Salad, it still is pretty dang tasty. And good for you! 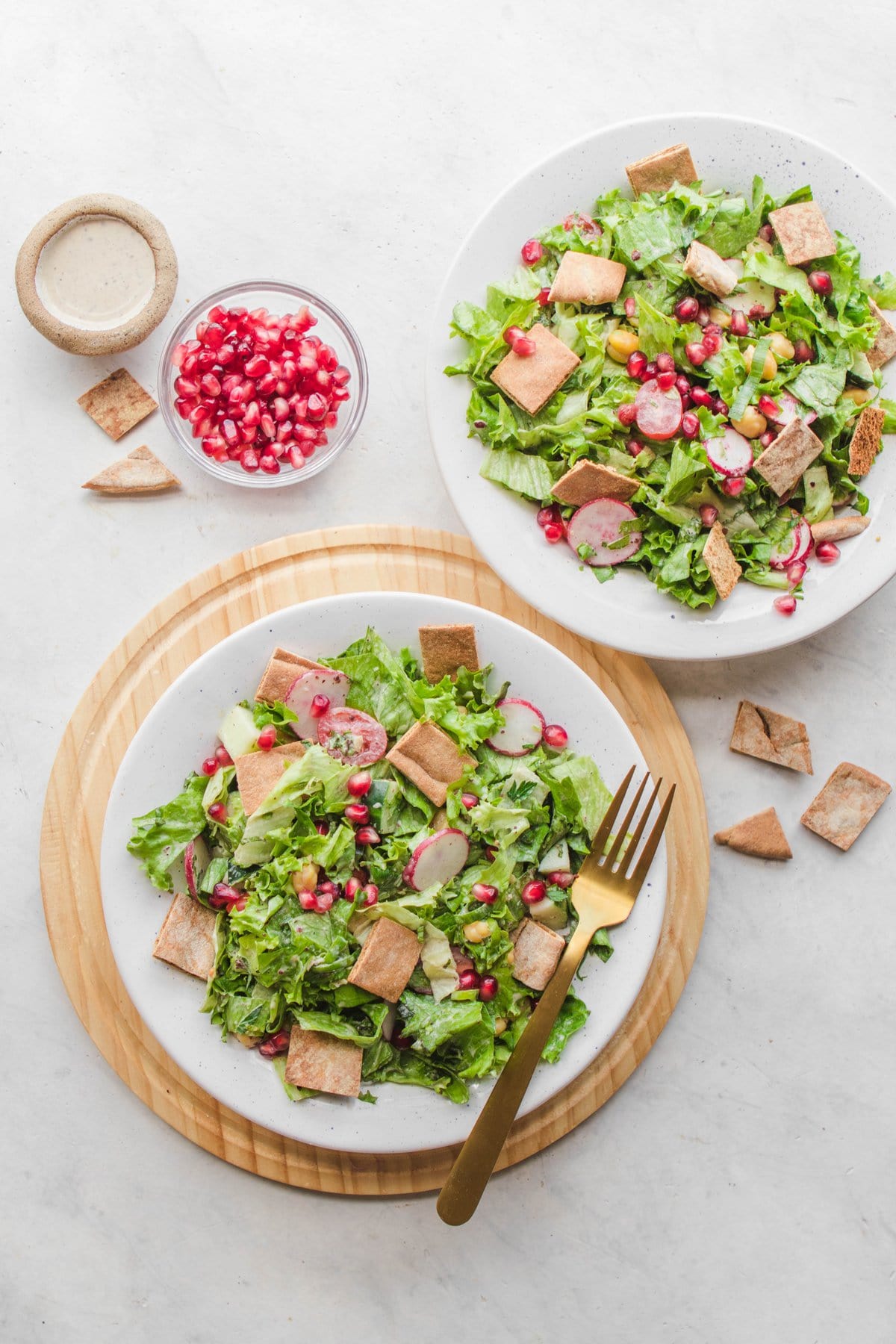 Now before we get into the recipe, let’s talk about Sumac. Sumac is a dried red berry that has a flavor similar to lemon, but much more complex. It’s less acidic and has more “body” to it. Dried Sumac can be hard to find in US grocery stores, so I recommend buying it online. You can also substitute the Sumac for Lemon Juice, but it won’t be quite the same. If you can get your hands on it, I really recommend it — it has a very lovely flavor. 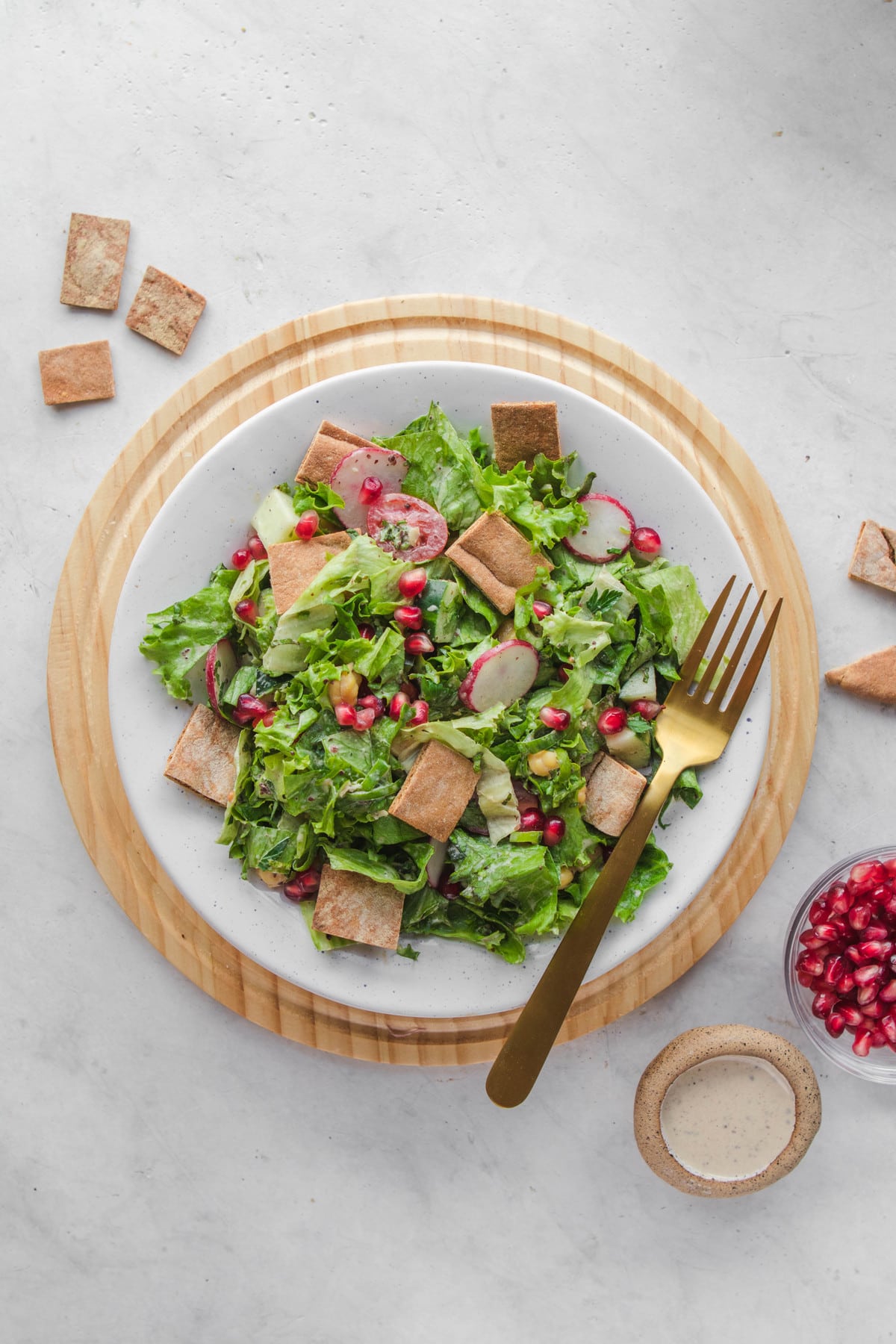 This Fattoush Salad with a Creamy Sumac Dressing is a spin on a classic Arabic Recipe! It’s fresh, tasty, and packed with veggies. Vegan, Healthy, and Oil-Free!

For the Creamy Sumac Dressing:

Want to save this Fattoush Salad for later? Pin the recipe to your Pinterest boards: 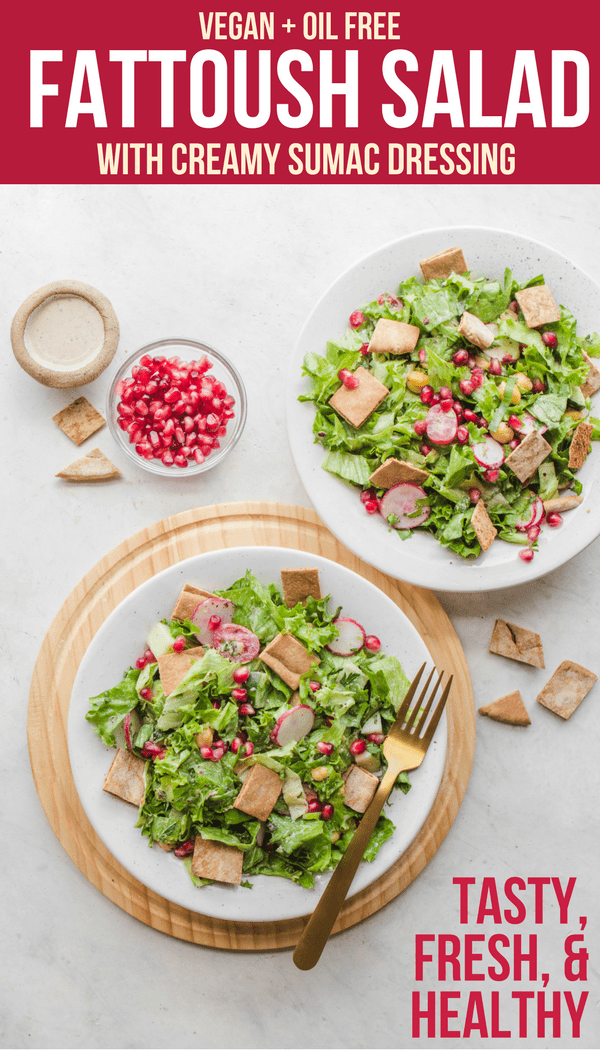 Yuuuum! This looks scrumptious and I cannot wait to make this this weekend when I’m home for lunch! I’ve never heard of sumac before let alone tried it so I cannot wait 🙂

I don’t often have fattoush salads, but this one looks delicious! Lately I have been incorporating a lot more salads into my daily diet, and it’s incredible to eat a large volume of micronutrient-dense greens along with a bunch of other fun ingredients! Oven-baked pita bread tastes heavenly too. They taste like delicious pita chips!