Learn the secrets to making the BEST vegan mushroom stuffing with simple ingredients and just 15 minutes of prep. Save a spot on your holiday tables for this favorite side dish! Vegan, Nut-Free.

This Vegan Mushroom Stuffing is the definition of buttery goodness. Classic vegetables sautéed in vegan butter, then tossed with crusty bread and baked in a savory broth until moist and tender. Vegans and non-vegans alike will absolutely love this one.

All About the Best Vegan Stuffing

Now, what makes this stuffing the best you ask?

What You Need For Vegan Mushroom Stuffing

In addition to the white wine, nutritional yeast, and tamari you’ll need 10 simple ingredients. The most prominent ingredient in stuffing is of course bread. I recommend using a loaf of vegan brioche or white bread. Vegan brioche is more difficult to find, but Trader Joe’s sells a vegan brioche loaf if you are in the United States!

You’ll also need a combination of your favorite mushrooms – I like to use a mix of cremini, shiitake, and oyster mushrooms for a well-rounded flavor. If needed, stick to one variety and it will turn out just fine.

How to Make Vegan Mushroom Stuffing

Make your family the ultimate feast this holiday season and serve this vegan mushroom stuffing with Vegan Lentil Loaf and a few side dishes like Healthy Sweet Potato Casserole, Vegan Green Bean Casserole and Baked Vegan Mac and Cheese.

If you’re looking for more Thanksgiving recipes, plan your full Thanksgiving menu including appetizers, soups and desserts with my Ultimate Vegan Thanksgiving Guide.

How To Store Mushroom Stuffing

Mushroom stuffing is best enjoyed immediately while warm, but will keep in the fridge for up to 5 days. I have not tested freezing stuffing, and cannot recommend it.

To reheat stuffing and keep it moist, bake covered at 350F for roughly 30 minutes, or until warmed through. Alternatively, reheat in a microwave safe dish with a splash of vegetable broth to keep moist.

Do you have to put eggs in stuffing?

Nope! Stuffing is incredibly easy to make without eggs. The only reason eggs are added to stuffing is to bind it together and add moisture. Vegan stuffing will hold together well enough with the liquid from the vegetable broth and vegan butter.

How do you keep stuffing moist?

In order to keep your stuffing as moist as possible, it’s important to cover the stuffing tightly with aluminum foil, or parchment paper followed by foil during the first half of the bake. This is going to allow the stuffing to steam and stay juicy and moist.

What is the difference between dressing and stuffing?

The ingredients in dressing and stuffing are often the same and the terms can be used interchangeably. Typically, what you call this dish depends on where you live. As a general rule of thumb, northern states use the term stuffing and southern states use dressing.

Is any boxed stuffing vegan?

Most boxed stuffings are not vegan, however there are a couple you can try from brands like Pepperidge Farm if you are short on time.

Can I make this stuffing in advance?

I wouldn’t recommend baking the entire stuffing in advance, but you can cook the mushroom and vegetable mixture up to 3 days in advance to save yourself some prep time.

Enjoy! If you make this recipe and decide to share it on Facebook or Instagram, don’t forget to tag me @FromMyBowl + #FromMyBowl! I would also love it if you could leave a comment below with a recipe rating! Thank you for the support 😊 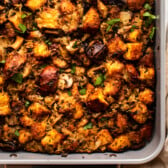 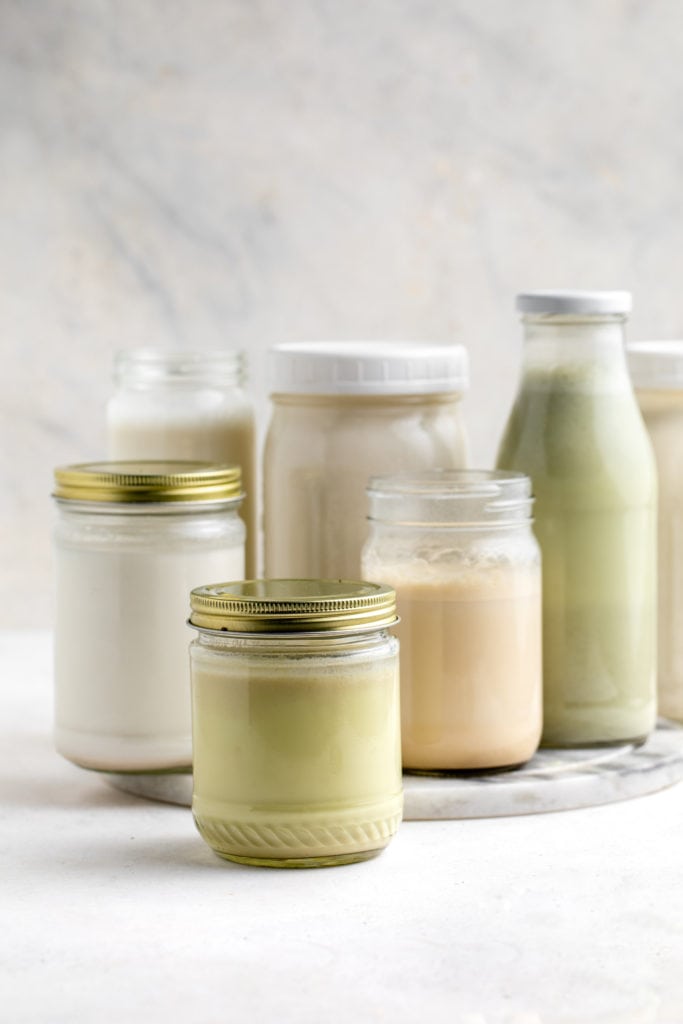 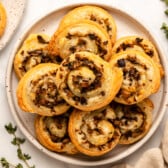 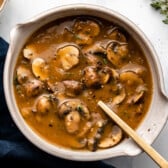 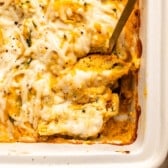 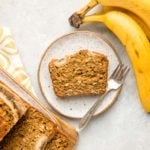 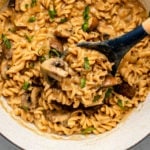 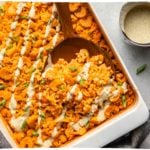